Were you dropped on your head as a baby or something?

I was wondering a few things. This happens to me a lot. I sit around wondering all the time. It’s like my brain won’t shut off! I thought I’d write and share a few of the things I think about. Like just the other day I was sitting here and I thought, “I wonder what’s the oddest, strangest, absolutely bizarre thing Chuck Testa has ever taxidermized?” Part of me is frightened by the idea that this might not just be a singular thing! Like maybe the oddest thing isn’t the same animal as the strangest one or even the absolutely bizarre animal!

I was also wondering if you’ve ever done people? I have a friend named Anthony Imperioli and it seems like a damn shame that when he dies he’ll just be stuck in the ground or cremated! Seems to me if he could be taxidermized he could continue to bring pleasure to people for generations! I’m guessing you don’t do people though, and Anthony is still alive regardless, so it’s probably not going to happen any time soon even if you do.

Have you ever met Ted Nugent? I hear he likes to hunt and I thought it would be awesome if you’d taxidermized something for him.

Thank you for the nice letter. I can totally relate to your nonstop thought process, as I am exactly the same way. I think it is a sign of creativity so I am sure you have a very interesting and unusual mind.

So to address your questions, the oddest and most bizarre work I have done is a baby calf and it was a repair job. What was so unusual about the calf was that it had two heads and four front feet. It was for a Ripley’s believe it or not Museum and it was so old the leather was hanging off in shreds. Quite a difficult job I must say. More recently, I had a customer call and ask if I would put a few bones in my cleaning solution. I said sure and to come by. When he got to the house he had 3 bones in a glass jar of formaldehyde, and said they were HIS rib bones. It turned out that he had to have his ribs removed due to some kind of disease, and he wanted to do something creative with his bones. Is that the weirdest thing you have ever heard?? I must say it is the strangest request I have received.

Obviously everyone jokes about taxidermizing Grandmas and such, but it is against the law to do anything on humans. I don’t know all the rules and reasons but I know that besides the Egyptian days, nobody has ever attempted taxidermy on a human being (to my knowledge). Well did you get a chance to watch the new video yet. It’s called Dope Zebra and you can find it on Youtube. Its kind of silly and fun and it’s going viral… Yeaaaa.

Well I was gonna tell you I have an awesome anteater in the shop right now that I mounted, and a badger that is really neat looking. I also have a bearded dragon that a customer never came to pick up and it’s sitting next to my computer as my mascot. That’s why I don’t do pets by the way, because the customers never want to pay because it doesn’t look like their pet when it was alive. The personality dies with the animal.

Anyway, thanks for writing. Keep up the thinking and writing and maybe you should work on a book. Why the heck not. I’ll talk to you soon and have a great week. 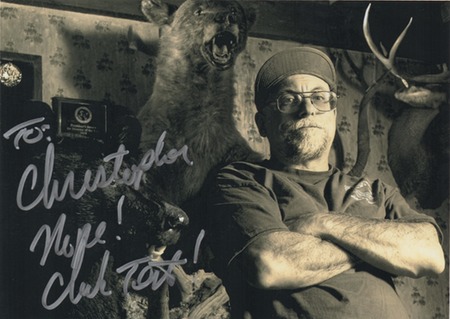