Christopher is the Magic 8 Ball of the depressingly obvious.

​Most nights when I get home I like to watch the news. I believe every citizen should do this to create a more informed and educated electorate. Now, I don’t want to get all political or anything, but seems to me there are a lot of incredible lapses in judgement and ethics being reported, so it got me to thinking that perhaps you guys had seen the writing on the wall and closed up shop before our current President could put someone wholly unqualified in charge of your office. I mean, it would explain a lot on why no one has been held accountable for anything if no one was there anymore. So I decided the easiest way to find out would be to pen this here letter and send it through the United States Postal Service. If it bounces I’ll have my answer in five to six short weeks! I understand, that if you actually get around to responding, your letter might take longer than that, but I am a patient man. I’m also dashingly handsome, but that’s really got nothing to do with this.

Now, I’m not suggesting you are asleep at the switch, or that people there aren’t doing their jobs, but maybe you guys aren’t in the habit of watching the news every night like I am, and just aren’t aware of everything that’s going on in Washington (it’s a mess!).

If you have to choose between writing me back, or actually enforcing some ethics rules, well then, I say go with the rules! But it would be nice if you could do both.

This is in response to your letter to the United Slates Office of Government Ethics (OGE).

While we appreciate your letter, OGE was established by the Ethics in Government Act of 1978 to be the office responsible for setting policies aimed at the prevention of conflicts of interest in the executive branch of the Federal Government. OGE, a small agency within the executive branch, assists other executive branch departments and agencies to implement ethics rules and policies that deal with conflict-of-interest laws, post-employment restrictions, the standards of ethical conduct, and the public and confidential financial disclosure systems for executive branch federal employees.

OGE’s jurisdiction extends only to the specific ethics issues described above within the executive branch of the U.S. Government. OGE does not undertake for investigation the allegations of misconduct. In most cases, it would be the Inspector General of the department or agency involved who would determine whether to investigate alleged misconduct. In addition, in appropriate cases, the Federal Bureau of Investigation of the Department of Justice may determine to investigate alleged misconduct of federal employees.

We regret that this office could not be of further assistance. 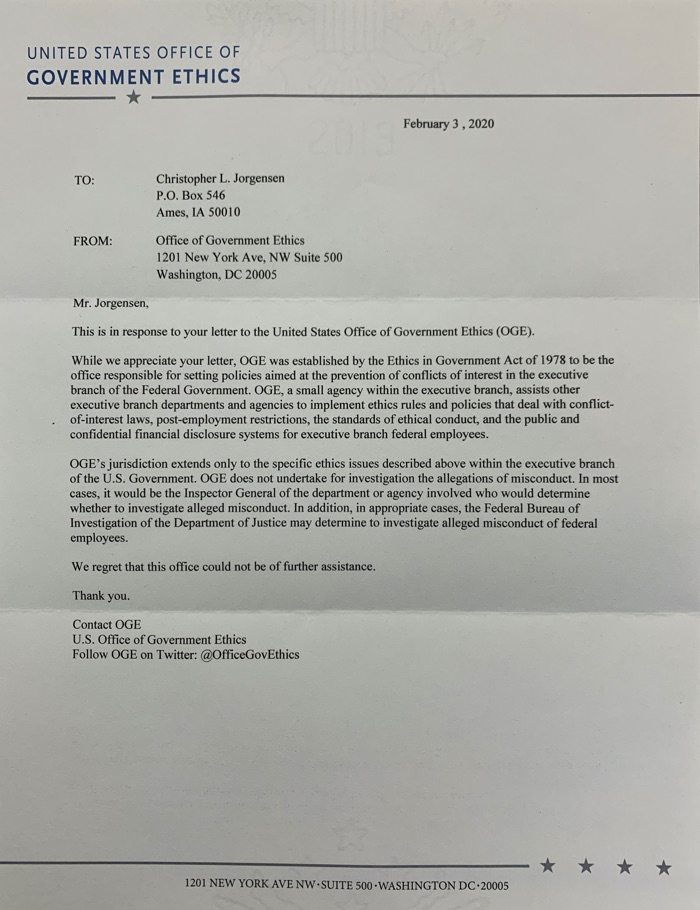