Home of the world's best hamberders.

I’ve Seen You Somewhere Before 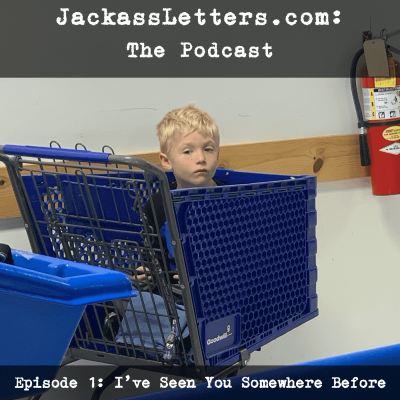 Christopher reads a handful of his favorite letters and does his best to entertain. This episode features a guest reading by Si Dawson as well as brand new artwork by Kenny Durkin. “Write a Letter” theme song by Josh Millard. Letters to: National Miniature Donkey Association, Cockapoo Club of America, Bain Capital, a fan letter to Christopher Moore, and Doctors Oz and Phil, as well as a letter to that rightwing hack Dennis Miller. The majority of this episode are unanswered letters from the jackassletters.com Dead Letter Office, but the Anthony Imperioli letters both have replies. Good ones too!

File Description: This is the MP3 version of Episode 1: "I've seen You Somewhere Before"
Credit: Christopher L. Jorgensen

File Description: This is the MP4 version of Episode 1: "I've Seen You Somewhere Before."
Credit: Christopher L. Jorgensen

This is a rough transcript. I will add links and polish it over the next few days. Hopefully in the future, I’ll figure out a faster, more accurate, and less labor intensive way to do this.

Welcome to the Jackass Letters podcast with your host Christopher L. Jorgensen.

I’ve wanted to do a podcast for quite some time, so hopefully I’ll be able to stick with this and make something that you’ll enjoy listening to, and if you do, please consider backing me on my patreon which is patreon.com/jackassletters. There’s also a support link on my website, with other methods of being able to help out supporting the website that you know and love, so please check that out. If not a patreon user I’ve got plenty of other methods of showing a little love my way. One of the things I thought I’d do today is I’m just going to go through and read a handful of my favorite letters. So the first one is to the National Miniture Donkey Association and this is one of my Anthony Imperioli Letters. Anthony Imperioli is just some guy you know. I’ve never met him. Don’t know him. I found him on twitter, oh I don’t know, ten years ago, back when twitter was brand new and there was like sixteen people on it, and so we started up, you know, banter and went back and forth with tweets, so I started using him as a character in my letters, and one of the things I really wanted to do was just make up a lot of stuff about him that, I don’t know, it could be true. I have no idea, since I’ve never met the man. So that gives you a tiny backstory, so…

So basically she says if I’m going to send Anthony a donkey I need to send him two. I never did send him a donkey, but you never know…

Si Dawson guest reads an unanswered letter to Bain Capital regarding the employment history of one Willard Romney. That was a guest reading from the Jackass Letters Dead Letter Office by Si Dawson. He can be found on twitter @sidawson. You should give him a follow. If you would like to read a letter for this podcast just reach out and let’s make it happen!

Christopher reads the Cockapoo Club of America letter with reply.

So, what makes this letter so brilliant on the reply, in my mind, and you’re going to have to go to the website to see this, is that she included a photo of said dog that was obviously just kind of cut right out of a family photo and scanned. It’s a little tiny black little cutie with dark brown eyes and someone is holding it up to the camera but it is obviously a family or group shot that they cut the dog out of.

Christopher reads a letter to Duke Traps with sort of a reply.

And then their entire reply was to send me a Xeroxed page of Duke Traps. “America’s Best Trap Value. Free Shipping on $100 Orders or More,” and it just has a bunch of giant bear traps, coon traps, badger traps, long spring, coil spring, advertisings about their “pelt preparation department,” boots and gloves, caged traps, lures and baits, and they highlighted the Duke Bear Trap. So, I can either get it in the sixteen inch or the twelve inch, and I don’t know, they look like they are about $175 or $298. Apparently this is what you need to keep kids off your lawn.

I would like to take a moment to thank the Randazza Legal Group for representing Jackass Letters in all legal matters. I am sure that without them I’d either be in prison by now or sued to oblivion. If I ever do find myself in prison, most likely it was because I neglected to follow Marc’s advice. If I ever get sued it’ll probably be because I said something true about Devin Nunes. It’s good to know that Randazza has my back!

So here’s a letter that failed to get a reply. I wrote Christopher Moore. He’s an author I that happen to like, and so I thought I’d write him a letter and tell him, “I happen to like you.”

And yes, sometimes I write letters where I fully intend to never receive a reply, but the actual writing and sending it is a bit cathartic. I still stand by this one twelve years later. Dennis Miller, you’re a hack.

Ok, two more unanswered letters and then I think I am going to call this good for an inaugural episode, and you guys let me know what you think. Thanks!

So I have a visceral dislike for Dr. Oz. TV doctors just make me cringe, and he hasn’t gotten any better over the years. So…I don’t feel bad for this one.

Yeah, like I said, TV doctors drive me crazy.

Christopher reads an unanswered letter to Hooters. I’m not actively looking for sponsorships, but in the unlikely event this podcast takes off, I’m totally willing to take your money to promote a product or cause or website. Reach out and we can chat. I’m also open to minimal advertising on jackassletters.com. You can write me at sponsorships@jackassletters.com or at Christopher L. Jorgensen PO Box 546, Ames, IA 50010. I’ll do my best to reply.

Podcast artwork by Kenny Durkin. “Write a Letter” them song by Josh Millard.